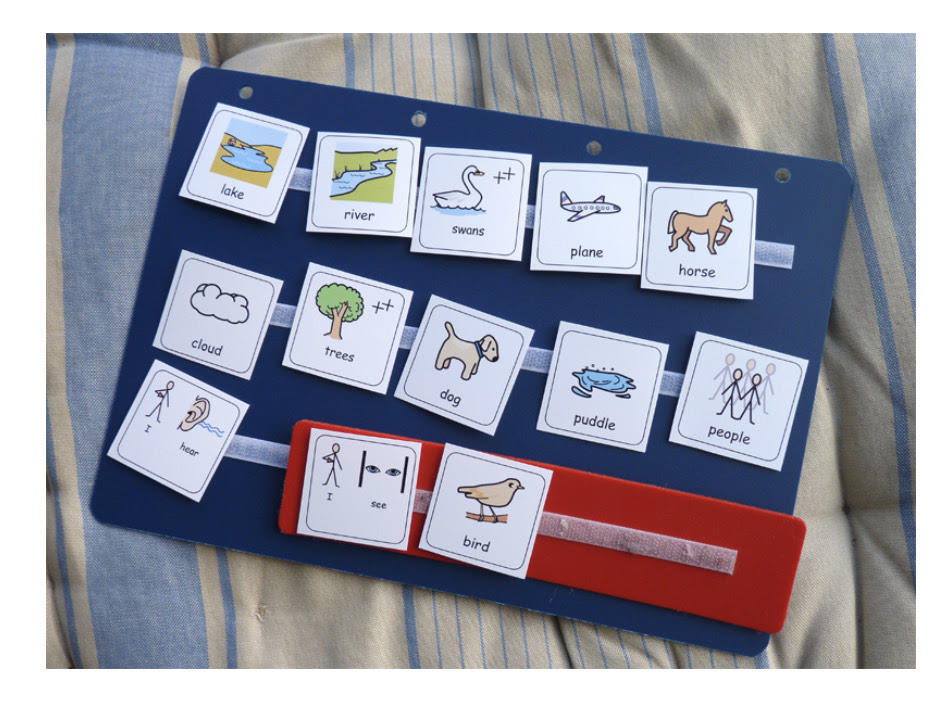 From PECS to “infinity and beyond!’

Home News From PECS to “infinity and beyond!’

From PECS to “infinity and beyond!” 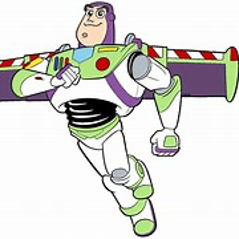 The Picture Exchange Communication System* (PECS) is an evidence-based approach, widely used to provide a functional communication system for children with autism or other communication disorders. It is based on applied behavioural analysis to teach a child a desired communicative behaviour (exchanging a picture) by providing an immediate reward for that behaviour (what the child wants).  There are six phases which the child works through at their own rate although some children do not reach the later phases.  Sadly, I often hear parents say, ‘we tried PECS but gave up!’.  However, with family-centred therapy, pre-school children can progress beyond phase 6 in under twelve months and before school entry.

This article describes the rapid progress made by two case studies CHILD-M and CHILD-F. In both cases, I worked alongside my colleagues in the public sector to contribute to the diagnostic and statutory assessment processes. I measured outcomes using the FOCUS** and the results are shown on the diagram.

CHILD-M was 2 years 6 months at referral. His mother described him as being “non-verbal and having chaotic behaviours, he didn’t understand how to play … we had to guess why he was crying”. She went on “If we got it wrong it led to upset and outbursts”.

During the first month, we placed pictures on cupboards and walls to act as visual supports aiding his understanding of what his parents were saying to him. We then prepared for Phase 1 by moving desired items out of reach, which meant he had to reach towards the toy he wanted. M became more settled and was ready to start PECS.

For the next two months, I coached his parents and his childminder to establish phases 1 to 3. Phase 1 was the hardest to master as it was difficult to find things to motivate him and he did not tolerate physical prompting well. But once he got the idea and began to experience success, he quickly became intentional in his exchanges and mastered phase 2 (this involved him travelling to his communication partner and being more persistent in his exchanges) and phase 3, where he had to discriminate between pictures. CHILD-M’s mother commented “We added loads of pictures to his book at this time. M worked at a fast pace and got bored if not challenged. He kept me and Annette on our toes!”. 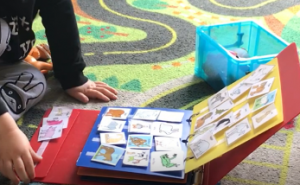 After only three months, he was ready for phase 4, which involved exchanging a sentence. He had developed a keen interest in animals so was able to create a sentence such as “I want horse” and exchange it for an animal toy. We continued to work on other communication targets to incorporate visual schedules and receptive language concepts such as no, finished, more. CHILD-M began to verbalise when he established phase 4 but his speech was not clear. It was at this stage that we made the decision to separate the ‘I’ and the ‘want’ to help him become clearer. This worked instantly as he learnt to say each word in his sentence and by the sixth month he became ready for phase 5, where he had to add a colour to his sentence (e.g. “I want brown horse”, “I want pink pig”).

By the seventh month, CHILD-M therapy visits mostly took place within the nursery setting and reduced in frequency to fortnightly. His spoken language improved and he no longer needed to use his PECS book to ask for familiar requests, as he had internalised these sentences. However, it was useful to clarify what he was saying, and we continued to use it to teach new sentences. 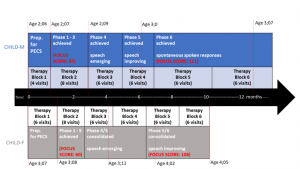 CHILD-F was 3 years 7 months when his parents came to me following a recommendation that they try PECS with him as he was showing no signs of developing verbal language. They felt at a loss and were seeking help to get this started. I began by visiting CHILD-F at nursery for 6 weeks to establish visual supports within the nursery setting and do the preparatory work for introducing PECS.

I then provide an intensive block of therapy over 5 weeks to introduce PECS at home during the summer holidays. CHILD-F quickly learnt that ‘if I want something, I need to swap a picture for it’. His parents were able to work constantly on each phase between visits and he had mastered phase 3 (discriminating between 2 pictures) after three visits in the first week. Week two involved two visits to establish phase 4. CHILD-F’s mother explains “Now F had to put an ‘I want’ picture in front of the object picture on the strip and hand the strip to us…F needed prompting a little bit but picked this up really well”. He was motivated to run to his dad to exchange his created sentence to request body parts to build a toy. At this stage we added ‘please’ picture to the end of his requests as he was already signing ‘please’. 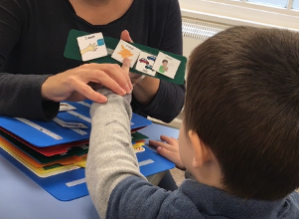 By the end of the fifth week ( 3 months after I started work with CHILD-F), we had expanded his vocabulary of pictures in his PECS book and extended his sentences to add attributes of colour and number (Phase 5). CHILD-F began to vocalise as he pointed to each picture while his parents ‘read back’ his sentence. His mother comments, “My child has got to the stage of requesting everything he needs with a sentence. If he does not approach us with it, we ask him what he wants and hold out our hand … he runs off and comes back with the sentence strip”. He is able to verbalise familiar sentences and although his speech is not clear, it is improving”. Weekly therapy for CHILD-F continued for the next six months in the nursery setting to consolidate his use of PECS as well as to work on his speech clarity when ‘reading back’ his sentences. His speech improved steadily, and he learnt new sentence structures.

Currently, both children are at phase 6 and beyond! CHILD-M is working on creating sentences to comment on his play and on story books. He is learning to express emotions, ask questions and give directions. CHILD-F is working on retelling parts of a story using a story board and developing his understanding and use of verbs. These children still have significant social communication difficulties associated with their autism diagnoses, but they have made remarkable progress in their communication skills.

My research and experience with these and other families has taught me that good preparation and parent partnership are the key factors for PECS to work well. I have learnt how important it is to respond to the individual child’s pace as well as needs and to keep communication opportunities motivating and challenging.

The PECS approach provides both the visual and structural means to teach intentional communication, but my work with these pre-school children has shown me that, with intensive and bespoke therapy input, PECS can also be a vehicle to allow a child with autism to acquire unexpected speech, language and learning skills at a crucial time in their development. As CHILD-M’s mother comments “I cannot believe the changes, not only in M’s speech but how he has changed as a child…consistent therapy is what works!”.